Kendrick's healing journey continues. It is measured in very small steps, baby steps if you will.  His foster Mom has been able to move back home with him which makes life easier. Fostering, and the deep love and commitment it takes, is often a day-by-day, sometimes minute-by-minute process. Victories are precious and worth the time it takes to realize them....and so the process continues.

As I reflect on the past 2 weeks this Valentine’s Day, Kendrick is making significant progress in his healing.  It has not always been clear he was doing so, nor was it quick.  Slow and steady, that’s what we are aiming for now.  Kendrick’s own immune system has to do some of the work.  I was recently reminded that it took 6 months for it to get this bad, and it won’t heal in a few weeks.

At the end of our previous blog – Kendrick was just starting to turn around from a setback.  It took over a week to see any real progress again.  On Monday 2/1/2016 we started a short stent where his medicated baths hurt his skin, and he did not tolerate soaking for more than a few minutes. There were 2 baths where he actually whined to get out.  Out of all the time we’ve been doing baths that was a first.  So, he got out when he had enough and we switched to more topical ointments for a few days.  Thursday 2/4/2016 his bare skin patches had changed from a bright pink, to a yellowish flaky covering the pink.  This continues today, and those flakes make my skin itchy when I have extended contact with him.

At one point, we were concerned that he was fighting some yeast infection (he smells) and he’s been on extended antibiotics.  However, the anti-fungal he is on should also take care of the yeast.  We started homemade dog food on Friday 2/5/2016 to see if that would help him at all.  He really liked the homemade food, and it settled his stomach.  We continued this for one week.

Since I was concerned I couldn’t see much progress in his condition, I spoke with the vet again on Tuesday 2/9/2016 about the flaky patches wondering if this was another setback.  He asked lots of questions, and we discussed additional medications, food changes, probiotics, and his behavior.  We decided to leave everything as is, and continue with his appointment on Friday as planned. The rest of the week was much of the same. The one area we have seen significant improvement over the past weeks is Kendrick’s confidence.  Kendrick has grown comfortable enough that he allows his collar and leash to be put on each time we go outside without flinching or backing away.  He also hovers around wherever I am rather than hiding in his bed or under the table all of the time. He can go outside without a leash, and will stay near me.  We’ve gone for a few walks when the weather is warm enough for him, and he does very well.  This is one of the most “dog” like behavior I’ve seen from him to date.  He smells the trails, and looks around.  He never pulls on his leash and always walks nicely.  Kendrick chews some bones, and enjoys treats.  Toys are still a mystery to him, we’ll continue to work on that.
Friday 2/12/2016 we went back to the vet.  Several office staff commented on how much better he looked and how he was behaving compared to the previous two visits.  Kendrick did not shy away or cower from the staff moving about the office.  He wanted to greet the other dogs in the office, and explored the waiting area smelling all the foods and treats.

The vet was happy with his progress over-all, but we are concerned with the pinkness of all his skin.  There are only a few scabs left on his legs and belly, most are gone from his head and back.  He got another dose of antibiotics, did another skin scrape to test for yeast (negative), and the following continuing orders:
The biopsy is set for the end of the first 30 day anti-fungal dose, and is dependent on rather he has healed enough by then. Vet would like to see more of the scabs healed over, and less pink skin.  We don’t know if he has any food allergies, but want to avoid the most common.  Some of the directives are to avoid messing with the biopsy results, and limiting the number of variables leading up to the test.

Kendrick spent a couple of hours outside recently at the lake, and seemed to enjoy himself.  He is currently curled up asleep in the recliner, comfortable and content. We’ll let you know what we hear from the biopsy results as soon as we get the results. 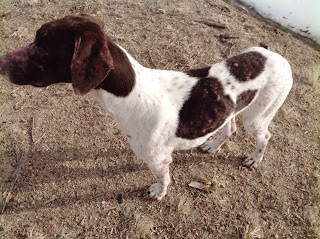 We were able move back home.  The vet said he is probably not contagious to our dogs.  However, we need to be cautious of being around animals, as he will be very susceptible to picking up things from others.

We thank you for the support, both financially and through Kendrick's wish list on Amazon. It touches our heart to know you deeply you care and are pulling for us.