Kendrick's Story - The Journey to Healing

Fostering takes an incredible sense of dedication, a commitment to love, and the patience to see the process through.  No two foster dogs are alike, and Kendrick is a special pup.  He doesn't know this, he doesn't know how far he's come and how lucky he is.  Mostly he's known misery, and lately he is learning the comfort of gentle touch and healing.  This is the first of chapter of Kendrick's story. 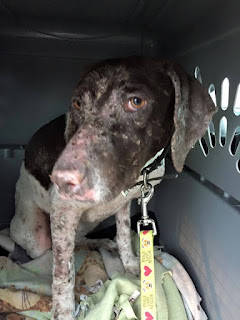 As I begin this story, we are on day 16 of his time with us.  The request for a foster home, the research into his condition of Ringworm, and the planning/decision to take him was actually a week or 10 days.  I’ve had dogs for most of my life, and even had some previous sad cases as a foster parent for GPPR – but nothing like Kendrick. Kendrick arrived at GPPR as an owner surrender, due to his condition not being manageable. We only knew he had ringworm.

Research taught me that this fungus (not a worm) was highly contagious to other animals and to humans. People posted about cleaning regimens, laundry, pet bedding, no sweeping, only vacuum or wet mops, etc. I prepared by going to the cabin, 35 miles from my home, and removing all of the rugs, toys, shoes, and anything else that was not needed or easy to clean. I stocked up on Clorox wipes, Swiffer sweeper dry cloths, wet cloths, bleach, paper towels, and athlete’s foot cream. I plan to stay at the cabin for as long as Kendrick is contagious.

His diagnosis was quickly confirmed, plus a secondary skin infection, by an emergency trip to a Minnesota vet on Friday 1/14/2016 before he was transported to Nebraska. Kendrick was so in so much pain, he wouldn’t lay down to sleep when he arrived Friday night.  He made his first visit to the Nebraska vet on Saturday 1/15/2016. Since he was not eating well after his transport and changes in his life, we decided to go with an injection for his antibiotic which should last about 14 days.  He received another injection for his pain, and was sent home with me with the following instructions:

 Pain medication, up to twice a day

The first couple of days, Kendrick hurt so bad I used his kennel as I carried him in and out of the cabin. Kendrick rested for a full 5 days.  He wouldn’t get out of his bed, the bottom half of a plastic kennel, unless I picked him up and carried him outside to go to the bathroom.  I picked him up to put him in his bath.  He would only eat if his food bowl and water dish were reachable from his kennel. Nothing enticed him to get up or come out, and I tried all the good high value treats including hamburger and steak. So, I would sit next to his kennel and talk to him.  I would apply some ointment, and pet his neck and ears which were the only areas he didn’t cringe when I touched.

On day six, Kendrick came out of his kennel when I called with a treat a few feet away. He stood next to me and allowed me to rub/massage his tender shoulders and a small portion of his back.  I stopped every few minutes at first, allowing him a chance to back away.   He inched closer each time. We stayed like this for 1.5 hours.  This became our regular routine, twice a day.  I would massage and rub any area he could tolerate for as long as he would stand and request it.  It took almost a week before I could touch some areas of his body.

This also turned into our bath routine. The cabin only has a shower, so I’ve got a plastic storage tub in the shower stall.  Fill it with 3-4 inches of luke warm water and some of his medicated shampoo to create a tub. The medicated water helps his feet/pads while I wash the rest of him.  The first few baths were little more than pouring the medicated water over his body and letting the suds sit on his skin for 10-15 minutes. He couldn’t tolerate much of the massage in the beginning.  Baths now are a 1.5 hour process, as we do the dry massage first, then the bath, then another massage with the towels. He is no longer afraid of his baths. We were so concerned when he first arrived, I actually had a muzzle just in case he couldn’t tolerate them, and I needed to bathe him anyway.  I am so glad we never had to use that!

Monday January 25th was the height of his improvement progress.  Most of his scabs were gone, the pink skin that showed through his fur looked healthy, and his nose was visibly healing.  Tuesday Kendrick stopped making progress.  Wednesday he had new sores on his nose.  Wednesday I called the vet again. We decided the 14 day antibiotic shot may have worn off, and we should start the oral antibiotics we had. They were started at noon that day. His anti-fungal medication was a custom compound from out of state, and only available from one lab.  Those meds ran out Friday, and the new ones didn’t arrive until Tuesday.

On Friday we realized the oral antibiotic were not well received by Kendrick. He stopped eating again, had an upset stomach, was back to sleeping all day, and not wanting to get out of his bed. Back to the vet we went. While the two medication changes should not have been a big deal, in Kendrick’s case they were. The vet immediately began thinking auto-immune. Only if the area was already compromised would a med change like this have such drastic results.

New plan:  30 days of anti-fungal (started Tuesday 1/26/2016) and 30 days of antibiotics.  Clear up the infection completely, then do a skin biopsy to confirm the auto-immune diagnosis.  If it is auto immune, then Kendrick will need a low dose medication the rest of his life to help manage the condition.  No, we can’t start the treatment for auto-immune without waiting for the 30 days.  If they sent the biopsy now, it would come back as ring worm, and secondary skin infection – which we already know.  Treatment for the condition is usually a steroid.  Again, can’t start that now because while it may help in the short term – in cases like this the infection will come back with a vengeance once the steroid treatment ends.  We have to treat the current condition completely, then look at the long term plans. This was the low point of our treatment to-date.  Much of the health pink skin was now red and angry looking, or scaly and itchy again.  While we don’t have the scabs this time, it was like stepping back a full week in his treatment.

Saturday, Kendrick started to show some signs of improvement again.  No new sores, and slight visible progress on his nose and Sunday is a little better yet.  The weather was warm, and we spent an hour outside today since he could tolerate the temperature with his missing fur.

My family have been very supportive, and visit us at the cabin a couple of times a week. While we visit them each time we make a trip to the vet.  Kendrick was introduced to our resident dogs on Saturday the 23rd, and he shows us more personality when they are around. They visited again last night and today. We will continue to take it one day at a time. 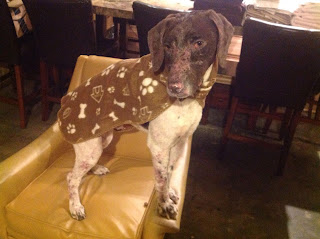 More Progress notes to come as we continue this journey.  … Angie & Kendrick
Posted by N. Bachmann at 1:39 PM